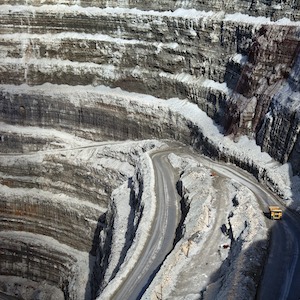 On Thursday, the U.S. Treasury announced a long list of sanctions against Russia, with some taking aim at state-owned diamond miner Alrosa and its CEO, Sergey S. Ivanov.

The new rules do not proscribe U.S. companies from doing business with Alrosa. Instead, President Biden’s executive order forbids them from engaging in transactions with the publicly traded miner involving “new debt of longer than 14 days maturity or new equity.”

While these moves are an attempt to limit Alrosa’s ability to raise U.S. capital, they could affect other transactions, says a member alert from the Jewelers Vigilance Committee (JVC).

The U.S. Treasury defines debt as “bonds, loans, extensions of credit, loan guarantees, letters of credit, drafts, bankers acceptances, discount notes or bills, or commercial paper,” and equity as “stocks, share issuances, depositary receipts, or any other evidence of title or ownership.”

That definition of debt could prohibit certain transactions with Alrosa or its affiliates, including memo agreements, JVC said.

An Alrosa spokesperson tells JCK via email that it doesn’t sell diamonds on memo and intends to conduct business as usual.

“We are carefully studying the new working conditions in connection with the imposed sanction,” said the spokesperson. “We do our best to guarantee the integrity of our operations, trading activities, and interaction with clients, including the work of our U.S. office.”

The JVC alert recommended companies be extra cautious in the current environment.

“Any U.S. business that is currently transacting with Alrosa or Alrosa USA should evaluate the status of any transactions and work to ensure that their transactions do not violate the sanctions,” it said.

It also noted that since a number of Russian banks were sanctioned, “businesses should be careful to check the [sanctioned entities] list before proceeding with any transaction.”

JVC adds that this order does not apply to any goods acquired from Alrosa before Feb. 24, which may be traded as usual. However, it recommends that businesses keep records specifying when Russian-origin goods were acquired.

Along with the new moves against Alrosa, the company’s CEO, Sergey S. Ivanov (also known as Sergey Ivanov Jr.), has been classified as a Specially Designated National (SDN) by the Office of Foreign Assets Control (OFAC). That means he can’t do business in the United States or with any U.S. citizens, and any U.S. assets will be seized.

Alrosa says that the designation will have no effect. “Sergey Ivanov never had assets abroad,” it said.

JVC warns that designation could be a red flag for further action.

“When a business is not on the OFAC list itself but is controlled by a blocked person, OFAC urges caution when considering a transaction with that entity [, as it] may become the subject of future designations or enforcement actions,”  adds the member alert. “OFAC recommends that persons should be cautious in dealing with such a non-blocked entity to ensure that they are not dealing with a blocked person representing the non-blocked entity, such as entering into a contract that is signed by that blocked person.”

Wind Down Business with Alrosa

JVC deputy general counsel Sara Yood believes that, until this situation is resolved, a “wind down of any business with Alrosa would be a prudent choice.”

Ivanov’s designation is part of a wider effort to target family members of the inner circle of Russian president Vladimir Putin. Ivanov’s father, former Russian deputy prime minister Sergey B. Ivanov, has been under U.S. sanctions since 2014.

Alrosa, the world’s largest diamond miner by volume, is 33% owned by the Russian Federation, and 33% owned by the government of Republic of Sakha (Yakutia), with the remainder publicly traded. It declined further comment on the situation.

Another Russian diamond producer, Grib, is owned by VTB Bank, which has also been sanctioned. It could not be reached for comment.

The U.S. sanctions are an attempt to cripple Russia’s financial sector in response to its invasion of Ukraine. Reports say the European Union is considering similar steps.

Tom Neys, spokesperson for Antwerp World Diamond Centre, the Belgium umbrella group, says that it’s still waiting to see what develops, but for the moment nothing has changed in the diamond trading hub.

“We follow it day by day, but first, we just hope the conflict will end soon,” he says.

He says market supply is currently OK, “but if the conflict goes on too long, this might change. Russian diamonds are very good quality and the end of [last] year depleted a lot of the stocks.”

If Russia is ejected from the SWIFT payment system, as some have called for, “that could be a big issue,” he says.

A U.S. Treasury FAQ about the sanctions can be seen here. For more information, JVC recommends reaching out through the OFAC hotline, 800-540-6322​, or the JVC, at info@jvclegal.org.

Find diamonds and jewelry at our on line store by clicking here.