“My great-great grandfather was Juan Gomez,” Deal told The Daily Sun before a recent treasure hunt in the Fort Ogden area of DeSoto County.

Beginning the Search for Treasure

Deal joined up with The Real Treasure Hunters, a local team searching for Gasparilla’s treasure, a few years ago to help them with the hunt.

“Our family was always told that he was Gasparilla,” she said. “Juan Gomez made up the story of Gasparilla because he did a lot questionable stuff and he didn’t want to get charged for it.”

Gasparilla’s treasure is said to be worth $30 million and stashed along the Peace River.

José Gaspar was reputed to have plundered the Gulf of Mexico’s waters at the turn of the 19th Century. But, with almost no record of his existence, there is a good chance the pirate, nicknamed Gasparilla, was a myth.

One of the only written records of Gaspar was in a brochure for the Charlotte Harbor and Northern Railroad Co. that operated in Boca Grande.

On the hunt for Gasparilla’s treasure

“He just came up with the story of this famous pirate,” Deal said, “but he (Juan Gomez) was the actual person.” 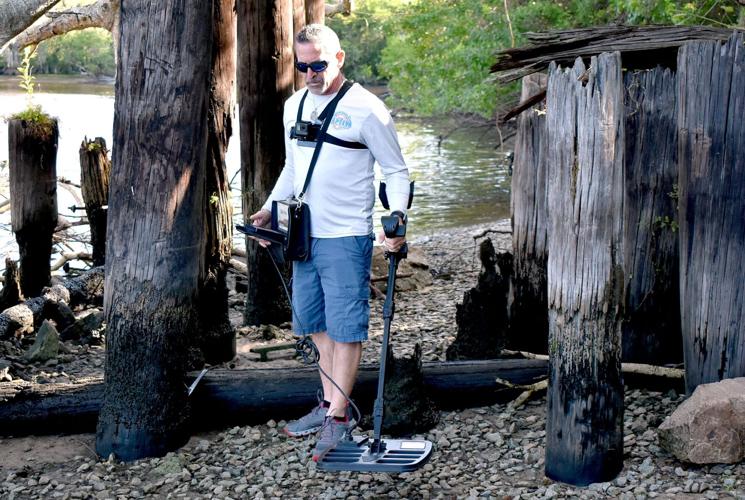 Michael Gattuso and The Real Treasure Hunters have been on the search for the treasure of legendary pirate José Gaspar, Gasparilla, for years. They continue to search along the Peace River in DeSoto and Charlotte counties. SUN PHOTO BY DANIEL SUTPHIN

Sarasota’s Michael Gattuso and members of his crew the Real Treasure Hunters made their cable TV debut on September 11, 2019 in an episode of Discovery’s Expedition Unknown. The following week they appeared on the Travel Channel’s Code of the Wild in an episode titled “Lost Treasure of Panther Key” on Sept. 17, 2019.

The team went back on the search recently along a riverbank in the Fort Ogden area in DeSoto County near an old, broken-down railroad bridge. The team did not want to reveal the specific location.

They were working with a lead from a story told by a few men at Boggs Jewelers in St. Petersburg around nine years ago. Many of the coins found were sold to Boggs at that time, and they are available for purchase at the store.

The three men turned in a box full of Spanish coins that had turned green from corrosion, Deal told The Daily Sun in an email.

The jewelers called in a former diver friend experienced with treasure hunting and he said the coins were a rare find, going on to value them at $800 to $1,200 each, according to Deal.

“The story is real,” Gattuso said. “Uncle Vern told us that three people had originally found it (the coins) along the Peace River. He told us where the location is. And he said supposedly he had found one of the chests.

“Originally, we had made contact with Uncle Vern because he is part of the Collins family, which is part of the Boggess family. He tells the story about the pirate Gasparilla whose ship went down and Juan Gomez fled to Lady Boggess’ property and he paid her hush money and buried the treasure on her property … so that’s why we cycled back to this location. This is where those men were said to have searched.”

Gattuso went on to say those three men attempted to pull the treasure out separately, but did not succeed.

“So, they staked it for later and went back and couldn’t locate it … they never found it,” Gattuso said. “Years later, I get a phone call from Boggs Jewelry and they say they had, awhile back, three men stop in saying they had treasure and a guy named Vern told him to go to Boggs Jewelry.

“The only Vern we know in this area we call Uncle Vern. Especially on Peace River and he happens to tell the same story that Uncle Vern had told us. So it’s kind of matching up.”

Gattuso purchased several of the coins from Boggs Jewelers and had them tested by a specialist in Indiana earlier this year.

“We showed them all the coins and they said they are ‘cob coins’ and they come from Bolivia,” Gattuso said. “At the time, Spain was running out of gold and silver so they used some different metals, so there is some silver in it but not a high quantity.

“There are different kinds of metals in there and the specialist said they are cob coins that came from Bolivia … so these coins are real.”

A Google search of “cob coins” does show they exist.

“The Spanish colonial mints at Potosí, Lima, Cartagena, Bogotá and Mexico City labored day and night to produce the irregularly shaped gold and silver coins commonly referred to as ‘macuquinas’ — crude hammered coins — or ‘cobs,’” according to SedwickCoins.com., ShipwreckTreasures oftheKeys.com has some cob coins for sale at $3,000 and more.

“I’m grateful for Mike for this coin (I’m wearing around my neck) because when he was up there in St. Petersburg looking at them, he got me one,” Deal said. “There are family pictures and stories and I’m sure there is more, but we’re still digging.

“There is a lot of family that didn’t talk about the Juan Gomez story. Still to this day they won’t talk about it and why, because the treasure is cursed. Only men in our family have looked for it. I’m the first female to do so.”

Is it real or Superstition?

Deal said anyone in her family who has searched and found any leads has been struck with misfortune, including being threatened by bulls.

Deal said her uncle, Larry Gomez, was searching for the treasure near the Everglades in the 1980s when “a white bull” appeared and charged at him.

She herself encountered a loose black bull as well while searching for the treasure in the DeSoto County area more recently.

Gattuso said his team hasn’t had any bad luck so far.

“As with any good treasure, there comes a bad curse,” he said. “That stays the case for treasure hunters looking for Gaspar’s treasure in the Peace River in Southwest Florida.”

“I was told pennies keep away bad spirits and demons so you always keep a penny in your pocket,” Gattuso added.

Other than old beer cans, dirty socks, and — believe it or not — a penny, no treasure was found on the morning hunt, but that won’t stop the team.

“We knew to check down by the railroad and south of it,” Gattuso said. “We checked where we could on land. We’re going to need a boat to do the rest. We just have to continue.

“There are plenty of areas still to check but we know it’s a little short area. We know, at least, the proximity. So we are probably going to have to come back by boat in a month or so.”

Team member Erin Melcher was excited to find the penny.

“That’s the first coin I ever found,” he said, laughing.

To follow The Real Treasure Hunters, go to Facebook.com/TheRealTreasureHunters. 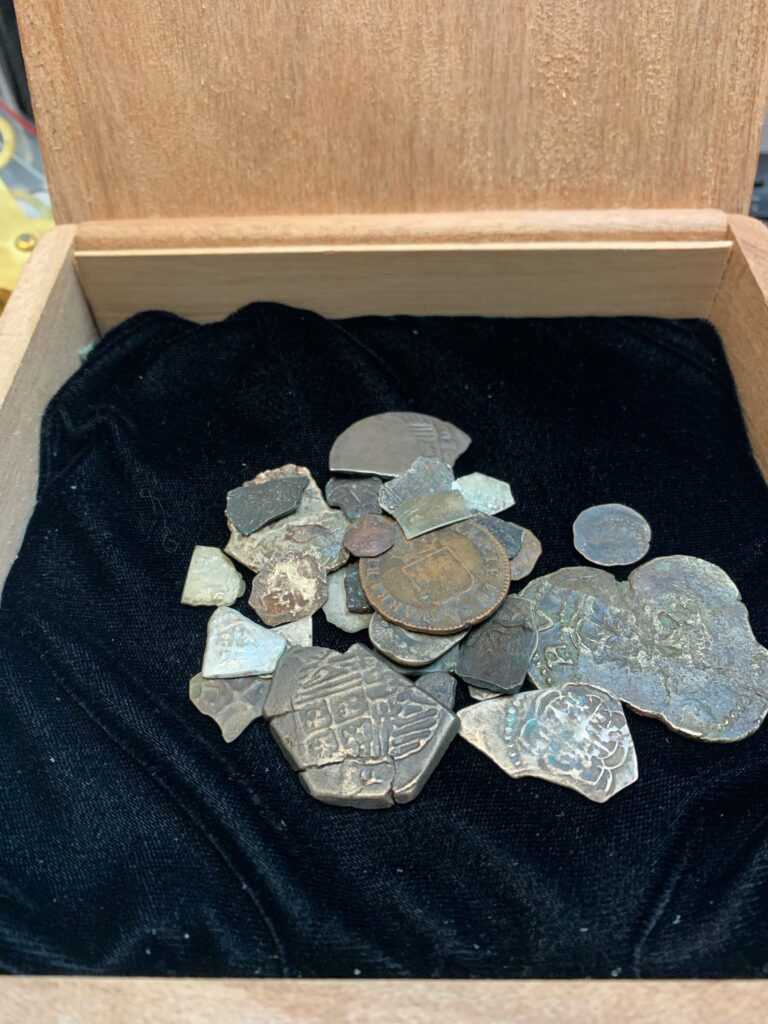 Box of coins sold to Boggs Jewelers nine years ago. Value is between $800-$3,000 each. Contact us to learn more…

To learn about these coins available at Boggs Jewelers click here to send us a message.

Below is a video version of this article: