Russia’s Invasion of Ukraine Has Befuddled the Kimberley Process 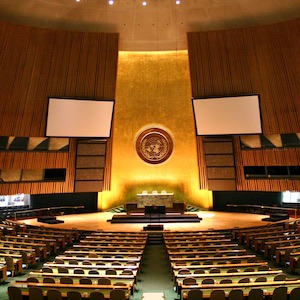 Photo courtesy of the United Nations

For a group comprising more than 80 countries, the Kimberley Process (KP) has generally operated apart from global politics. There have been occasional exceptions: In 2007, the Chinese delegation reportedly interrupted the KP plenary until the Taiwanese delegation was forced to leave.

But given the KP has been focused on one narrow topic—conflict diamonds—it’s been largely divorced from world affairs, having enough trouble making progress on its own specific issues.

Russia currently oversees two of the six KP working groups, and the United States and United Kingdom have refused to attend any meeting chaired by Russia. Russia responded angrily, noting the issue is outside the KP’s remit. (The communications, originally reported in Reuters, have been confirmed by JCK.)

In addition, the United Nations’ March 18 meeting endorsing the Kimberley Process—which takes place every year and is usually a dull affair featuring rote speeches—included heated denunciations of the Russian invasion by both the United States and European Union representatives.

“We cannot ignore that Russia accounts for a significant portion of global rough diamond production,” the U.S. representative said in the U.N. video, just before the two-hour mark, “and that these proceeds help finance the government, presumably including its military.

“At the same time, Russia has launched an unprovoked invasion of Ukraine.… The Kremlin’s actions are antithetical to the KP’s mission to keep rough diamond trade profits from funding conflicts against legitimate governments.”

When the Russian Federation representative spoke, he seemed to diverge from his prepared text and noted, “we are forced to comment on the assault on our delegation.

“We regret the politicization of our dialogue, and are grateful to the majority of those who took the floor, who focused on the agenda.… We, of course, reject false accusations, and we hope this information will soon abate.”

Yet, for all this, neither the United States nor the European Union currently have in place a blanket ban on Russian diamonds.

Current U.S. sanctions allow Russian diamonds to be imported if they are “substantially transformed” elsewhere, which the vast majority are. And neither the United States nor the European Union has called for the KP to ban Russian diamonds.

Nor, for that matter, has the Kimberley Process Civil Society Coalition (KPCSC), the alliance of human rights organizations that is often critical of the certification scheme.

On March 14, the KPCSC issued a statement calling on the KP “to ascertain that diamonds produced in Russia or by Russia’s state-owned diamond miner Alrosa do not contribute to financing conflict.”

The KPCSC declaration could be read as a call to boycott Russian diamonds, as Alrosa is 33% owned by the Russian government. Some took it that way.

But the KPCSC’s current chair, Michel Yoboue, head of GRPIE, a Côte d’Ivoire–based NGO, says the KPCSC is not asking for a ban or embargo.

“The situation between Russia and Ukraine is a political situation,” he says. “We work on conflict diamonds. What we want is for the KP to have a position about Ukraine.”

He says the KPCSC would instead support a “monitoring mechanism”.

He was also reluctant to call Russian diamonds conflict diamonds.

“We don’t have proof that Russian diamonds are financing the conflict [in Ukraine],” he says.

(The KP’s current definition of conflict diamonds is “rough diamonds used by rebel movements to finance wars against legitimate governments.” While the government in Ukraine is considered a legitimate government, and Russia is clearly trying to overthrow it, the Russian army might not be considered a “rebel group.” In addition, while gems sales likely help pay for the conflict, there isn’t the direct link we have seen in other wars, which were heavily financed by diamonds.)

The KPCSC also urged the KP’s current chair, Jacob Thamage of Botswana, to convene a KP plenary solely devoted to the issue. In response, Thamage said that he wasn’t allowed to do that under KP rules, and a participant—meaning a country—would have to make that request. (Presumably, none has.)

In a way, the KPCSC has some of the same issues that the KP itself has had—it is a coalition that requires consensus. After two notable Western nongovernmental organizations quit the KPCSC, it now consists almost entirely of African groups, some of whom see it as a way to communicate with their home governments.

And while the Ukraine issue has riveted the West’s attention, it is less of an issue in Africa, where conflicts have been raging for years but not have received as much global media interest. In addition, Russian influence in certain African countries could make speaking out potentially dangerous for NGOs.

It is also highly unlikely that the KP would approve a Russian ban, as the KP requires absolute consensus. (The United Nations can’t even get uniform condemnation of the Russian invasion.) The KP’s members include not only Russia—which wouldn’t be allowed a vote in this instance—but also nonaligned nations such as the United Arab Emirates, India, and China.

“In view of the KP’s notorious inaction, a call for classifying Russian diamonds as conflict diamonds or for KP sanctions on Russia would in my view be counterproductive,” Hans Merket, a researcher with the International Peace Information Service (IPIS), a member of the KPCSC, tells JCK via email. “It is indeed extremely unlikely that the KP will take any action on this matter. The more likely impact is that the KP gets even more stuck than it is already.”

He notes that the biggest issue the KP is dealing with now is Central African Republic (CAR)—the sole country universally considered to be producing conflict diamonds.

“It is unlikely that anything [regarding CAR] will be able to move under these circumstances, particularly given the controversial Russian involvement in the country,” says Merket.

How Russia is Involved With CAR

(The Russian government–linked Wagner Group is reported to be involved in fighting in CAR. Last year, Russia vetoed a United Nations proposal that would have extended monitoring of sanctions violations in CAR.)

Merket says the KPCSC’s recent statement was “an attempt to call out the governments and industry represented in [the KP], so that they cannot just ignore this issue. This will hopefully help to raise pressure on at least some important diamond trading or manufacturing centers to join and coordinate efforts to try and stop the trade in Russian diamonds, and on the World Diamond Council to take a stronger stance.”

For the moment, the World Diamond Council and the KP chair have remained mostly quiet on the Ukraine issue.

“We are like everyone, closely watching the developments in Ukraine,” Thamage told JCK. “My hope and prayer is for a speedy resolution of whatever the issues are and a return to peace.”