We Pick The Winning Looks 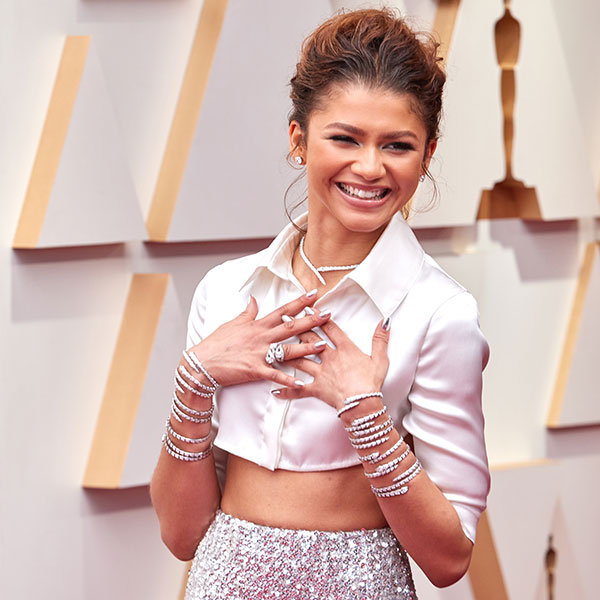 These are our 2022 Oscar Jewelry picks. The Oscars returned to the Dolby Theater on March 27, and people are still trying to puzzle them out. The powers that be presented a bunch of awards off-air, but the telecast was longer than ever. Megan Thee Stallion rapped a verse of “We Don’t Talk About Bruno,” from the Disney (!) animated movie Encanto. And the Best Actor winner assaulted a presenter/former Oscar host onstage.

As for the fashion, it was a night of red dresses and mostly white diamonds. Props to the stars (and stylists) who managed to put their own twists on some timeless looks, or come out with something really daring. And, of course, to the men who brought plenty of their own bling. 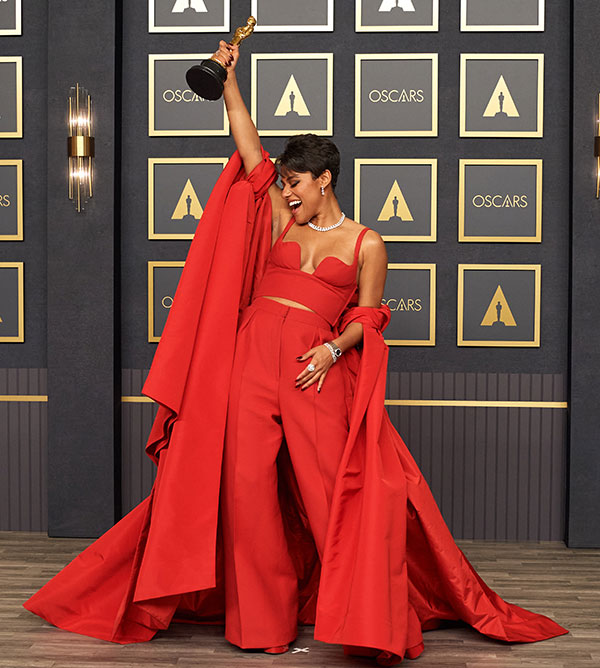 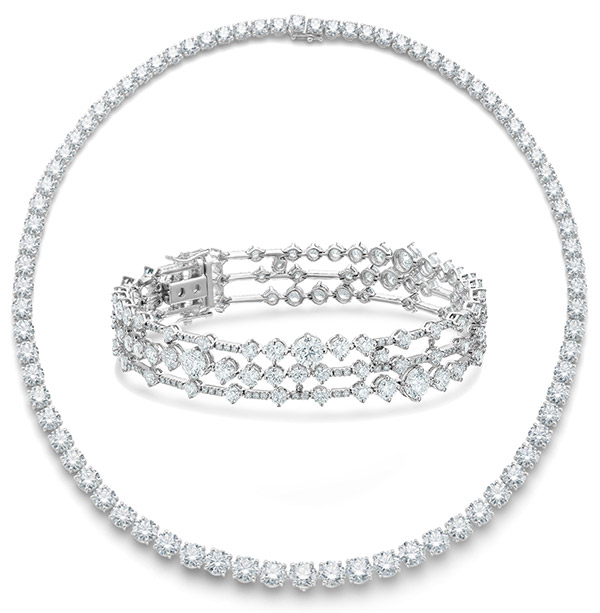 Okay, technically this isn’t a dress, but go with us here: Ariana DeBose—who’d won every major award leading up to the Oscars for her performance as Anita in Steven Spielberg’s West Side Story remake—looked every inch a winner in a hybrid tuxedo-gown look by Pierpaolo Piccioli for Valentino. And what goes better with red than white diamonds? Upping the classic quotient: the De Beers layered diamond tennis necklaces.

We love a red dress on a red carpet as much as anyone, but we love someone who mixes it up even more. Oscar winner Marlee Matlin—one of the stars of CODA, which won three Oscars, including Best Picture—made a bold and blue choice, and it paid off big-time: an early ’80s Harry Winston lapis lazuli and diamond necklace and earring suite, plus a 1950s Van Cleef & Arpels sapphire and diamond ring, all from Briony Raymond New York. Would that more actresses followed her lead when it came to jewelry selection.

You couldn’t miss it peeking out from underneath the sleeves of Smit-McPhee’s baby blue Bottega Veneta suit: a diamond, diamond, and more diamond Cartier Révélation d’Une Panthère watch. (Plus a diamond necklace, and a couple of rings for good measure.) The Power of the Dog supporting actor nominee may not have landed an Oscar, but he definitely landed on best-dressed lists worldwide.

Normally you don’t notice a pair of hoop earrings on the red carpet. But the Verdura twisted horn ear clips worn by Rita Moreno, the Oscar-winning star of the original 1961 West Side Story, were so bold they even peeked through her feathered headpiece. The 90-year-old actress and OG Anita—stunning in a dramatic ruffled off-the-shoulder Carolina Herrera gown—is also featured in the West Side remake as Valentina, the widow of drugstore owner Doc.

With its pink and gold embellishments and streamers, that Prada dress is almost a jewel in itself, so Nyong’o didn’t need much more sparkle. (Did we really say that?) But her longtime stylist Micaela Erlanger made some smart, subtle choices: earrings and a ring from De Beers’ 2021 Reflections of Nature high jewelry collection, plus an art deco–inspired statement ring from the brand’s 2022 Alchemist of Light high jewelry collection. Nyong’o never goes wrong with jewelry.

The third time was indeed the charm for Chastain, who finally won an Oscar for her sensational, sympathetic portrayal of singer-evangelist–TV personality Tammy Faye Bakker in The Eyes of Tammy Faye. For her golden moment, the actress wore a custom Gucci tulle gown with ombré bronze and lilac sequins and Gucci high jewelry in pink, lilac, and light blue spinel. All-diamond jewelry would have been lovely, but the spinel choice was terrifically unexpected.

Bonus: Jessica Chastain in Gucci at the Vanity Fair afterparty

Chastain changed into yet another Gucci gown—an emerald silk lamé strapless number—after the ceremony, and added a spectacular Gucci statement necklace to boot.

No shirt, no problem! Chalamet—who starred in Dune, the evening’s winningest movie—sparked many a chest-in-show headline with his Nicolas Ghesquière for Louis Vuitton sequined suit. (Perhaps a reaction to all that body armor he wore in Dune.) Hey, all the better to show off those Cartier necklaces! And he didn’t stop there: He also added a mess of rings and two bracelets. Who else can’t wait to see what he wears to the Met Gala?

Tennis legend Venus Williams served up some serious style in a plunging silver-trimmed Elie Saab gown and silver jewelry that was instantly recognizable to JCK readers: large Elsa Peretti Bone cuffs on both wrists. She also wore a sculptural silver ring and earrings by the late designer. Don’t be surprised if you see a run on Peretti pieces at Tiffany & Co. this week. Williams proved they’re absolutely black-tie ready—but as we all know, they’re perfect everyday pieces too.

Did anyone else catch Minnelli—who was presenting Best Picture with Lady Gaga—wearing Elsa Peretti cuffs on both of her wrists as well? We suspect the cuffs were Minnelli’s own; she’s been photographed numerous times over the years wearing them. Let’s hope she managed to get a Wonder Twins–style backstage pic with Williams!

Top: We think Zendaya is smiling because she’s wearing so much Bulgari jewelry. We certainly would be! (photo: Michael Baker/A.M.P.A.S.)

(All jewelry photos courtesy of the brands)