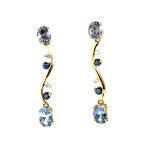 — Tanzanite, Turquoise and Zircon reflect the cold tones of the winter season in which December babies are born. See our picks for beautiful December birthstone jewelry gifts.

Tanzanite is the blue and violet variety of the mineral zoisite (a calcium aluminum hydroxyl sorosilicate), caused by small amounts of vanadium. The stone, Tanzanite, belongs to the epidote mineral group. The stone is only found in Tanzania, in a very small mining area (approximately 7 km (4.3 mi) long and 2 km (1.2 mi) wide) near the Mererani Hills.

Tanzanite is noted for its remarkably strong trichroism, appearing alternately blue, violet and burgundy depending on crystal orientation. Tanzanite can also appear differently when viewed under different lighting conditions. The blues appear more evident when subjected to fluorescent light and the violet hues can be seen readily when viewed under incandescent illumination. In its rough state tanzanite is colored a reddish brown to clear, and it requires heat treatment to remove the brownish “veil” and bring out the blue violet of the stone.

The gemstone was given the name ‘tanzanite’ by Tiffany & Co. after Tanzania, the country in which it was discovered. The scientific name of “blue-violet zoisite” was not thought to be sufficiently consumer friendly by Tiffany’s marketing department, who introduced it to the market in 1968. In 2002, the American Gem Trade Association chose tanzanite as a December birthstone, the first change to their birthstone list since 1912.

Turquoise is an opaque, blue-to-green mineral that is a hydrated phosphate of copper and aluminium, with the chemical formula CuAl6(PO4)4(OH)8·4H2O. It is rare and valuable in finer grades and has been prized as a gemstone and ornamental stone for thousands of years owing to its unique hue. Like most other opaque gems, turquoise has been devalued by the introduction onto the market of treatments, imitations and synthetics.

The gemstone has been known by many names. Pliny the Elder referred to the mineral as callais (from Ancient Greek κάλαϊς) and the Aztecs knew it as chalchihuitl. The word turquoise dates to the 17th century and is derived from the French turquois meaning “Turkish” because the mineral was first brought to Europe through Turkey from mines in the historical Khorasan of Iran (Persia).

Zircon is a mineral belonging to the group of nesosilicates, and it is a source of the metal zirconium. Its chemical name is zirconium silicate, and its corresponding chemical formula is ZrSiO4. A common empirical formula showing some of the range of substitution in zircon is (Zr1–y, REEy)(SiO4)1–x(OH)4x–y. Zircon forms in silicate melts with large proportions of high field strength incompatible elements. For example, hafnium is almost always present in quantities ranging from 1 to 4%. The crystal structure of zircon is tetragonal crystal system. The natural color of zircon varies between colorless, yellow-golden, red, brown, blue and green.

The name derives from the Persian zargun, meaning “gold-hued”. This word is corrupted into “jargoon“, a term applied to light-colored zircons. The English word “zircon” is derived from Zirkon, which is the German adaptation of this word. Yellow, orange and red zircon is also known as “hyacinth”, from the flower hyacinthus, whose name is of Ancient Greek origin.

Browse jewelry and jewelry gift ideas in our Jewelry Gallery.

Finally, if you have any questions about this article, ask us by clicking here. We value you as a customer!