According to the American Gem Society, August is one of three birth months represented by three different gemstones.

In 2016, August joined June and December as one of the three birth months represented by three different gemstones. The original birthstone for August was sardonyx, and then peridot was added, becoming August’s primary gemstone. The addition of spinel, which can be found in a variety of colors, gives August babies a plethora of options! 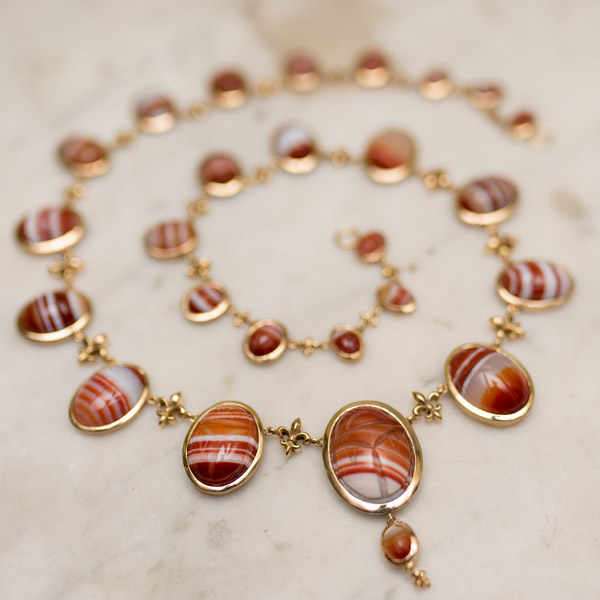 Today’s focus will focus on sardonyx. Thanks to JCK Online for portions of this article.

Arguably, sardonyx is the birthstone of August. With a history that dates back more than 4,000 years, it’s the original birthstone of the month—though you wouldn’t know it, given how much attention peridot and spinel are given.

We visited the GIA website for learning about gemstones to discover a bit more about this ancient gem. It’s simply not a stone we see all that often.

Sardonyx is like a layer cake of two types of chalcedony: sard and onyx. That’s where it gets those cool stripes; they’re an alternating pattern of the two stones, one—onyx—very well-known, and the other—sard—well, less so. So there’s another rabbit hole to fall down: What is sard? Simple enough—a translucent chalcedony in an orangish, reddish, brownish hue.

Sardonyx, in a word, is cool. It’s got this laid-back desert vibe that feels so peaceful and low-maintenance. It’s beautiful to look at, though, as I understand it, not particularly valuable, which might explain its lack of popularity.

Still, why don’t more jewelers use it? And furthermore, why haven’t more people heard of it? Even some of the most experienced gemstone designers we have spoken to were hazy on the gem, so presumably most consumers have no clue about it.

JCK put out a call for designers and brands to send their sardonyx jewelry creations. And got absolutely nothing.

So they did a little searching and came across Emily Marquis, a jewelry designer based in Stonington, Connecticut, who also runs a jewelry academy in the area. She had the most beautiful sardonyx scarab necklace, one of the finest examples of the gem we’ve seen (and also amazing because it features scarabs). She was kind enough to talk with them a little bit about the gemstone, lending further knowledge in our quest for more about it.

JCK: How often do you design with sardonyx? What do you like about the stone?

Emily Marquis: The sardonyx stone for me brings levels of symbolism. A stone of strength and protection, courage and happiness, communication and stability. After I had finished this [scarab necklace] and did a little research, those all felt very true to the journey I’d been on while designing and fabricating this piece. I was initially attracted to the orange and white bands when I had first discovered these vintage scarabs three years ago, and it took me all three years to collect this graduated set, each from a separate costume scarab bracelet or brooch from the 1920s to the 1970s. Opposed to the other shades of sardonyx and the banded agates (natural and dyed), the orange struck me: There’s a bold and regal bit about it, as well as a known commonness to the fact that it’s found in the earth that way. It was very popularly used for cameos, but the bands were not showcased.

Despite it being an official birthstone for August, it’s not one seen too often! Any thoughts as to why more jewelers don’t work with the gem?

We see a large amount of banded agate in antique Scottish jewelry (1700s–1900s), then it pops up again in global—France, Britain, U.S., Japan—vintage costume jewelry (1920–1970s), and we’re starting to see it again globally online. I’m sure something to do with the “rarity” of the stone is that opaque stones, especially banded agates, are akin to river rock and less luxurious than your precious stones or translucent faceted stones. But I think there is a bit of a timely cottage-core thing happening right now where these stones pop back into fashion: People getting back to their roots. We saw that with the noble Georgians fantasizing about being farmers, we see it with the beginnings of Renaissance fairs and heritage festivals in the 1950s to 1970s, and we’re seeing it again through Instagram and the mass evacuations from cities to the countryside.

Any other rare (or lesser-known) stones you enjoy working with?
I really enjoy using the lavender and periwinkle hues of chalcedony, inclusionless rock crystal, unusually banded or multicolored tourmalines, gray and purple spinel, and Washington nephrite jade. While I wouldn’t call them rare, they are less common, and I find myself needing to do a lot of education on them compared to other stones like sapphire, amethyst, ruby, and peridot. Much of our work lately has been seeking smaller stonecutters, transparent operation (mine-to-bench) gem dealers, vintage or reclaimed stones from old settings.

So, while it sounds like we won’t be seeing too many sardonyx jewels—particularly in fine jewelry—it’s always fun to learn new things, and we look forward to the next gemstone that stumps us (surely there will be many).

If you happen to have your own sardonyx stones, we can turn them into custom jewelry of any kind. Whether a scarab, necklace, ring or ear rings you can add your own flair to this wonderful birthstone. Click here to inquire about custom jewelry.

You can also find jewelry on our “in-store” shopping cart, at well as our on-line store.