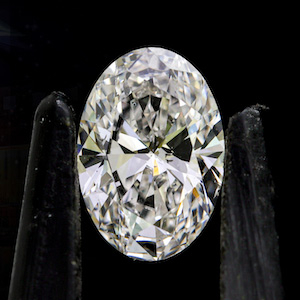 That was significantly below its initial hope of raising up to $30 million.

The stock now trades on Nasdaq under the ticker “JEWL.”

Adamas’ shares were originally priced at $4.50. The day after its debut, the stock briefly rose to $11.94, though at the time of publication it was trading at $4.75 a share.

The Nevada-based company’s prospectus contained a “going concern” warning, noting that it has an accumulated $30.2 million in debt as of Sept. 30.

“We will need additional financing to implement our full business plan and to service our ongoing operations,” it said.

On Dec. 13, it announced it had trademarked two new slogans: “The original lab-grown company” and  a new tagline, “Not mined. Not fake. Just sped up perfection.”

Adamas One, headed by Jay Grdina—a veteran entrepreneur who has headed everything from adult film to hangover cure companies—purchased Scio Diamond in 2018. Scio, which went public in 2011, was one of the first companies to produce lab-grown diamonds.

Grdina will serve as Adamas One’s, president, chairman, and CEO, while Scio CEO Gerald McGuire will act as its chief operating officer.

During its tumultuous eight-year life, Scio contended with numerous shareholder lawsuits, and while Adamas One hasn’t been around quite as long, there’s already a legal action filed against it.

In a shareholder derivative and class-action complaint filed in Nevada federal court in February, and then refiled and amended on Sept. 30, former Scio board member Theodurus Strous accused Scio’s board of breaching its fiduciary duty by letting the original 900,000 Adamas shares originally meant for Scio shareholders be diluted to 800,000. The amended complaint added Adamas One and Grdina as defendants.

Adamas declined comment. Attorneys for the defendants did not return a request for comment by the time of publication.