What is likely the third largest piece of gem-quality rough ever unearthed—weighing 1,098 cts.—was recently unearthed at the Jwaneng mine in Botswana. 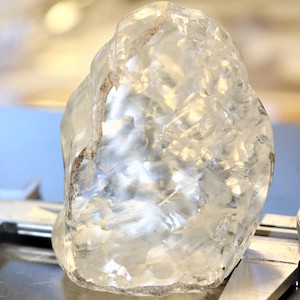 The discovery, made on June 1, is the largest diamond find in the history of Debswana—the 50-50 partnership between De Beers and the government of Botswana—which owns the mine. The diamond was found because of new technology that preserves big stones, which in the past were crushed during the excavation process.

The diamond was described in a release as “high gem-quality,” but a De Beers spokesperson said no further information was available.

As far as how it will be sold, the release said, “Debswana will work with the government of the Republic of Botswana and De Beers to value and sell the diamond to ensure it returns maximum benefit for the people of Botswana; and will communicate further plans to bring this unique treasure to market in due course.”

Perhaps the only comparable diamond is the Lesedi. After a failed auction at Sotheby’s, where it failed to meet its $70 million reserve, it was bought by Graff Diamonds for $53 million.

The previous largest find from a Debswana mine was 446 cts., found at the Jwaneng mine in 1993.

The Botswana government’s Twitter feed added: “[President Masisi] said Debswana should use this latest discovery as an inflection point, for the mine to use its technology to realize more of these large discoveries.”

In 2019, Lucara discovered a 1,758 ct. piece of rough at Karowe that was considered only “near gem” quality.

Boggs Jewelers has a selection of Diamonds we can use to create custom jewelry designs just for you! Learn more by clicking here.