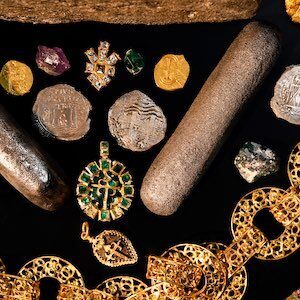 A treasure trove of jewelry was recently rescued from a famed Spanish shipwreck that has been lying on the ocean floor off the Bahamas for more than 360 years.

The items were recouped from Nuestra Señora de las Maravillas (Our Lady of Wonders), which sank on Jan. 4, 1656, supposedly after it collided with its fleet’s flagship and then hit a reef 30 minutes later.

The jewels and related finds  have been on display since Aug. 8 at the Bahamas Maritime Museum in Freeport, Grand Bahamas.

The haul includes: gold and silver chains, a silver sword handle, and four pendants worn by members of the Order of Santiago, a religious band of knights once active in Spain. Of particular note is one item that is believed to have belonged to the Order of Santiago: a gold Cross of St. James, which overlays a green oval-shape Colombian emerald. Its outer edge is framed by 12 square emeralds, perhaps symbolizing the 12 apostles.

“When we brought up the oval emerald and gold pendant, my breath caught in my throat,” said Carl Allen, founder of Allen Expeditions, which discovered the items, in a statement.

“The pendant mesmerizes me when I hold it and think about its history. How these tiny pendants survived in these harsh waters, and how we managed to find them is the miracle of the Maravillas.”

“Some say the remains were ground to dust,” he said. “Using modern technology and hard science, we’re now tracking a long and winding debris trail of finds.”

According to Allen’s team, many of the jewels that have been found are believed to have been contraband, as they were not registered on the ship’s manifest.

Top: Some of the items found in the shipwreck (photos by Brendan Chavez; courtesy of the Bahamas Maritime Museum)

Check out our own items for sale from Gasparilla’s Treasure in Florida by clicking here.