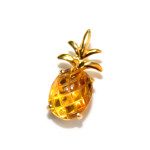 — Citrine and Topaz reflect the warm tones of the fall season in which November babies are born. See our picks for beautiful November birthstone jewelry gifts.

Citrine gets its name from the French word “citron,” which means lemon. It’s colors bring to mind the warmth of mid-day sun and range from pale yellow to deep burnt orange.

Citrine is a variety of quartz whose color ranges from a pale yellow to brown due to ferric impurities. Natural citrines are rare; most commercial citrines are heat-treated amethysts or smoky quartz. However, a heat-treated amethyst will have small lines in the crystal, as opposed to a natural citrine’s cloudy or smoky appearance. It is nearly impossible to differentiate between cut citrine and yellow topaz visually, but they differ in hardness.

Brazil is the leading producer of citrine, with much of its production coming from the state of Rio Grande do Sul. The name is derived from the Latin word citrina which means “yellow” and is also the origin of the word “citron“. Sometimes citrine and amethyst can be found together in the same crystal, which is then referred to as ametrine.[1] Citrine has been referred to as the “merchant’s stone” or “money stone,” due to a superstition that it would bring prosperity.[2]

Citrine was first appreciated as a golden-yellow gemstone in Greece between 300 and 150 BC, during the Hellenistic Age. The yellow quartz was used prior to that to decorate jewelry and tools but it was not highly sought after.

Topaz dates to biblical times and was originally discovered in its yellow form — and sometimes confused for citrine, which is why they share in celebrating this birthstone month. While it is known for its warm amber, orange and brown shades, it can be found in a range of colors from pinks to cool blues and greens.

Topaz in its natural state is a golden brown to yellow – a characteristic which means it is sometimes confused with citrine, a less valuable gemstone. A variety of impurities and treatments may make topaz wine red, pale gray, reddish-orange, pale green, or pink (rare), and opaque to translucent/transparent. The pink and red varieties come from chromium replacing aluminium in its crystalline structure.

Orange topaz, also known as precious topaz, is the conventional birthstone for November, the symbol of friendship and the state gemstone of the U.S. state of Utah.

Imperial topaz is yellow, pink (rare, if natural) or pink-orange. Brazilian imperial topaz can often have a bright yellow to deep golden brown hue, sometimes even violet. Many brown or pale topazes are treated to make them bright yellow, gold, pink, or violet colored. Some imperial topaz stones can fade on exposure to sunlight for an extended period of time.

Blue topaz is the state gemstone of the US state of Texas. Naturally occurring blue topaz is quite rare. Typically, colorless, gray, or pale yellow and blue material is heat treated and irradiated to produce a more desired darker blue.

Mystic topaz is colorless topaz which has been artificially coated via a vapor deposition process giving it a rainbow effect on its surface.

Although very hard, topaz must be treated with greater care than some other minerals of similar hardness (such as corundum). This is because of a weakness of atomic bonding of the stone’s molecules along one or another axial plane. Whereas diamonds, for example, are composed of carbon atoms bonded to each other with equal strength along all of its planes. This gives topaz a tendency to break along such a cleavage plane if struck with sufficient force.

Topaz has a relatively low index of refraction for a gemstone. Stones with large facets or tables do not sparkle as readily as stones cut from minerals with higher refractive indices. Quality colorless topaz sparkles and shows more “life” than similarly cut quartz. When given a typical “brilliant” cut, topaz may either show a sparkling table facet surrounded by dead-looking crown facets or a ring of sparkling crown facets with a dull well-like table.

Where to buy November Birthstones

Browse jewelry and jewelry gift ideas in our Jewelry Gallery.

Finally, if you have any questions about this article, ask us by clicking here. We value you as a customer!

Thank you to Jewelers of America and Wikipedia.org for the contributions to this post.

When shopping for birthstone jewelry gifts, always shop with professional jewelers — look for jewelry stores that are Jewelers of America Members — who can show you a range of options and explain any special properties of the birthstone jewelry.