No Clock Too Big To Repair 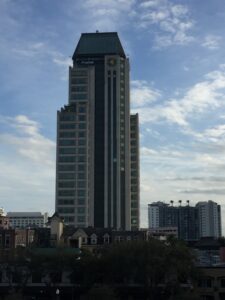 We just completed a repair project on the monster clock in the Priatek Plaza building in downtown St. Petersburg, FL.

The original giant clock was installed when the building was completed in 1990. Wear and tear over time caused a failure and Boggs Jewelers was contracted to repair the clock. 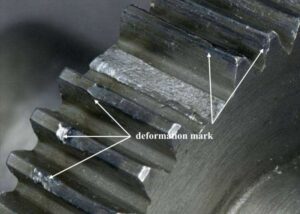 Upon inspection the reduction gear assembly was severely damaged from age and harsh conditions.

The clock is more than 30 years old, so the required service parts were unavailable because the existing mechanism was unidentifiable. Using reverse engineering our design team re-created the parts exactly, including spline cutting.

In October of 2021 we completed the monster clock repair. It now performs in its original location.

If you need a clock repaired click here to learn more.

Horologists (mechanical clock makers and watchmakers) understand the physics behind making and repairing clocks to keep time as accurately as possible. Over time, the gears wear out and must be replaced.

A gear is a rotating circular machine part having cut teeth or, in the case of a cogwheel or gearwheel, inserted teeth (called cogs), which mesh with another (compatible) toothed part to transmit (convert) torque and speed. The basic principle behind the operation of gears is analogous to the basic principle of levers. A gear may also be known informally as a cog. Geared devices can change the speed, torque, and direction of a power source. Gears of different sizes produce a change in torque, creating a mechanical advantage, through their gear ratio, and thus may be considered a simple machine. The rotational speeds, and the torques, of two meshing gears differ in proportion to their diameters. The teeth on the two meshing gears all have the same shape.

Two or more meshing gears, working in a sequence, are called a gear train or a transmission. The gears in a transmission are analogous to the wheels in a crossed, belt pulley system. An advantage of gears is that the teeth of a gear prevent slippage. In transmissions with multiple gear ratios—such as bicycles, motorcycles, and cars—the term “gear” (e.g., “first gear”) refers to a gear ratio rather than an actual physical gear. The term describes similar devices, even when the gear ratio is continuous rather than discrete, or when the device does not actually contain gears, as in a continuously variable transmission.

Furthermore, a gear can mesh with a linear toothed part, called a rack, producing translation instead of rotation.