– Do you know the source of the gold you are wearing? 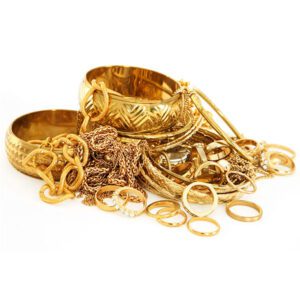 The yellow metal is frequently used in ­money laundering and has funded uprisings in the Democratic Republic of the Congo and elsewhere. Small-scale miners often use mercury, a hazardous chemical that erodes the health of both the miners and the environment around them. A documentary film shown at last year’s New York City Jewelry Week, River of Gold, demonstrated how gold mining hurts the Amazon rainforest.

There are signs the outside world has started paying attention. Last year, The New York Times reported that “tainted gold from Colombia may have ended up in your iPhone.” (Apple is a huge gold consumer.) An episode of the Netflix documentary series Dirty Money was devoted to conflict gold.

The problem is, gold is hard to track—harder even than diamonds and colored stones, which aren’t exactly easy. Given that gold is endlessly repurposed and recycled, it’s possible that some of the gold currently in circulation was excavated thousands of years ago.

That said, there are steps jewelers can take to improve their gold supply chain. The first should be a no-brainer, says Tiffany Stevens, president and CEO of the Jewelers Vigilance Committee: Follow the law. 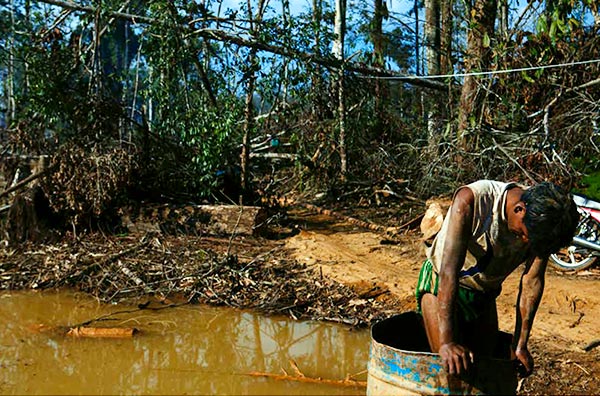 In River of Gold, an illegal gold miner in the Amazon stands in a barrel filled with mercury. (Photo: Ron Haviv/VII Photo)

The Patriot Act, passed in 2001, requires U.S. companies that buy or sell $50,000 or more in precious metals or gems to have an anti–money laundering program in place, with regular testing. Many towns and states also require jewelers to follow certain procedures—such as asking for identification and holding items for a waiting period—when they buy jewelry “off the street.” While these dictates don’t solve the sourcing issues, they will introduce jewelers to the concept of due diligence, which underpins most sourcing schemes.

Due-diligence frameworks can often seem daunting and jargon-filled, but the idea behind them is dealing only with people you trust, and making sure that you ­understand their procedures as well as their suppliers.

It also means asking questions. The gold due-diligence framework developed by the Organisation for Economic Co-operation and Development (OECD) recommends that jewelers start by quizzing manufacturers about the refiners they buy from.

“[The refiners] are choke points in the gold supply chain and are a key actor in ensuring that you know the provenance of your gold,” says Iris Van der Veken, executive ­director of the Responsible Jewellery Council, which just put out a practical guide to implementing OECD due diligence.

Once you identify the refiners, make sure they are ­undergoing regular audits. (The London Bullion Market Association, or LBMA, is a respected auditor.) Some even recommend jewelers ask for copies of the audits. Tyler Gillard, head of sector projects and legal adviser for the OECD’s Responsible Business Conduct unit says, “More than 96% of the world’s gold is processed by refiners that undergo some kind of audit. It’s the other 4% that’s the problem.”

None of these systems is foolproof, of course. Companies can lie. Refiners can lie. Sometimes the auditors lie. It’s still important to make the effort, Gillard says. “Due diligence is a responsibility of conduct, not a responsibility of outcome,” Gillard explains. “You are not providing guarantees. You are making good-faith efforts to implement these standards with a view toward progressive improvement.”

Due diligence is even required when dealing with recycled gold, which some have embraced as a cure-all to gold sourcing issues. While the concept is easy to explain to consumers, recycling gold carries the risk of being used as a conduit for money laundering.

“Just because you are selling recycled gold doesn’t mean you can relax,” says Brad Brooks-Rubin, managing director of the Enough Project, a nonprofit that focuses on sourcing issues in Africa. There have been cases when gold billed as recycled “doesn’t fit that definition,” he says. For example, sometimes the reused metals are mixed with newly mined gold.

In July, SwissAid, a Bern-based nonprofit, accused local refiners of selling recycled gold that came from Sudanese armed militias that have been implicated in war crimes and human rights abuses. “While these refineries claim to import only recycled gold from the [United Arab Emirates], the study shows that some of this gold is believed to come from African mines,” the organization concluded.

Some companies get audited to ensure that their ­recycled gold truly fits that description; for instance, Hoover & Strong’s gold recycling procedures are certified by SCS Global Services.

Toby Pomeroy, the Portland, Ore.–based designer who is leading the charge to remove mercury from artisanal gold mining, calls recycled gold a “fine way to start” on the responsible sourcing path. But he does not agree with those who hope that buying recycled gold will obviate the need for mining altogether, noting how many livelihoods depend on it. (In any event, that scenario is unlikely ­given that we are in a period of low jewelry demand but ­record-high gold prices.)

Like many in the responsible sourcing community, Pomeroy—the executive director of Mercury Free Mining and a member of the Alliance for Responsible Mining’s board of directors—is more enthusiastic about special gold products, such as Fairmined, Fairtrade, and Just Gold, which not only guarantee their provenance but also help the desperately poor communities where the metal is mined. These brands also offer a unique selling point for companies that embrace them. Chopard, for example, has committed to using Fairmined and Fairtrade gold. Both brands use gold from artisanal miners that measures up to certain standards and gives back to local communities. Fairmined is offered by the Alliance for Responsible Mining; Fairtrade by the better-known Fairtrade Foundation. Just Gold, sourced from the Democratic Republic of the Congo, is a product of the nongovernmental organization Impact.

These products “are directly making a difference within those mining communities,” Pomeroy says. “They’re pretty bulletproof in terms of being unassailable in the integrity of their operations.”

The downside: There still isn’t that much special gold product available. It’s also expensive. Special gold often sells for a premium—and with gold trading over $2,000 an ounce (as of October 2020), the cost can add up.

Mark Hanna, chief marketing officer of Richline Group, says there are no easy, quick, or inexpensive solutions when it comes to responsible gold sourcing. But he believes in this environment, retailers must make the effort.

He also notes that the industry has come a long way.

After the Dodd-Frank Wall Street Reform and Consumer Protection Act passed in 2010, publicly traded jewelers were unpleasantly surprised to discover that the law contained a provision requiring them to report if any of the gold they used came from conflict-scarred regions of the Democratic Republic of the Congo. The affected jewelers were initially taken aback. Then they went to work. Now, a little more than a decade later, the three major publicly traded ­jewelers—Richline (a division of Berkshire Hathaway), Signet, and Tiffany—all say they know the source of an overwhelming majority of their gold.

Hanna admits that large companies like his possess more ­resources to deal with these issues, compared with smaller companies. But he adds that the big firms also have a greater and more sprawling pool of suppliers to monitor.

Still, when Hanna attends meetings of groups such as Ethical Metalsmiths, he’s impressed by all they’ve done to protect their supply chain. “They are small jewelers,” Hanna says. “They are passionate that nothing goes wrong. They don’t always have fancy procedures. But they manage it. Because they care.”

At Boggs Jewelers have procedures in place to make sure the gold we buy and use in our jewelry is in compliance with all applicable laws. You can trust that jewelry we create for you is of the highest quality. To learn more about our custom made jewelry click here.

If you have questions about this article you can email us by clicking here.

Thank you to Rob Bates at JCK for contributing to this article.