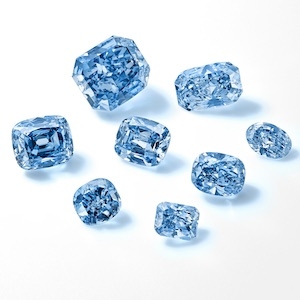 Sotheby’s will sell eight blue fancy blue diamonds from De Beers—with a combined total value of more than $70 million—across its Magnificent Jewels auctions over the next year.

The diamonds come from a collection of five rare blue roughs—weighing a total of 85.6 carats—which De Beers purchased for $40 million in November 2020 with partner Diacore. The diamonds were purchased from Petra Diamonds, which owns the Cullinan mine, which De Beers sold to Petra in 2007.

– De Beers Exceptional Blue 11.29, an 11.29 carat step-cut fancy vivid blue and the biggest, and potentially most valuable, diamond in the collection. It carries a $28 million–$50 million estimate.

It is one of three gems from this collection being sold at by the auction house this year. It will go under the hammer at on Nov. 9 at Sotheby’s Magnificent and Noble Jewels auction in Geneva.

– The De Beers Exceptional Blue 4.13, a step-cut fancy intense blue with a weight of 4.13 carats that will sell for an estimated $2.5 million–$3 million.